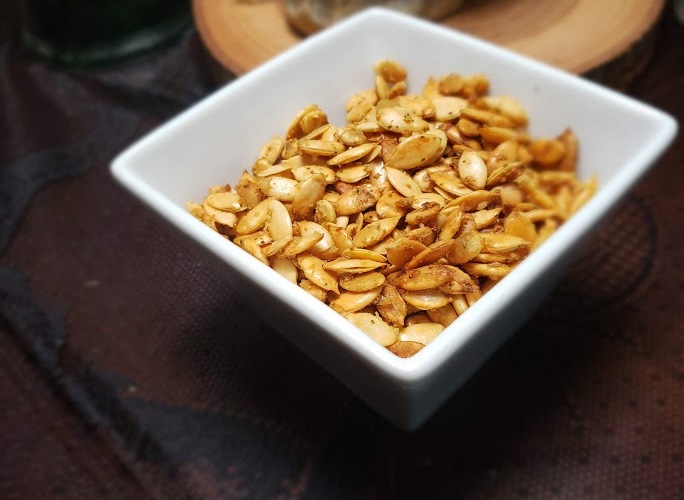 Every year I try some new way of making pumpkin seeds. I like to experiment with different flavors and prep methods but I have always baked them in the oven.

Each time they turn out fine but nothing amazing enough to write about… Until this year!

This year I decided to really mix things up!

My 3-year old helped with getting the seeds out of the three carving pumpkins we bought from the pumpkin patch. Which was absolutely adorable! She wasn’t sure about touching the gooey pumpkin guts at first but once she did it she was so proud of herself!

Over the years I have tried many different ways of separate the seeds from the guts. This year was by far the most effective! We wanted to try to use the pumpkin guts this year instead of throwing them away. So unlike years past when I’m really just trying to get the seeds out of the mess, this time I was trying to get the mess cleaned out first. By simply rinsing and picking the seeds off of the pumpkin guts and placing them in a separate bowl I was left with completely clean seeds at the end of the process. Then I spread them out on a towel to dry over night.

My big issue with pumpkin seeds has always been that I don’t personally care for the tough outside shell. I wondered if I could shell the seeds first to have a delicious and healthy snack without the inconvenience of the shell. Once the seeds were dry I started shelling the seeds one by one… And I continued shelling… and continued… and continued…

I am not ashamed to admit that I gave up after that and I will never pre-shell pumpkin seeds again! Next I wanted to experiment with different ways to cook the seeds. I separated the seeds into three batches.

The inner seeds we had managed to shell I tossed with melted butter, garlic salt and a pinch of pepper until fully coated. I then put them in the air fryer at 375°F for 10 minutes, tossing half way through for even cooking. These by far turned out the best! they are crispy, toasty, salty and just pop right in your mouth!

The rest of the seeds still in the shell I separated into two batches. I tossed them all in melted butter, garlic salt and a pinch of pepper until fully coated. One half I cooked in the air fryer at 375°F for 15 minutes, tossing every five minutes for even cooking. The other half I baked in the oven as I have in the past at 400°F for 20 minutes.

All three batches are healthy and delicious! My favorite to eat by far turned out to be the the shell removed and air fried! However, it was way too much work for such a small amount of food… While the most delicious, it was not worth the hours and hours required to pre-shell the seeds.

Between the shell on batches I was pleasantly surprised by the air fryer turn out. The air fryer cooked faster and provided a more even crisp without burning the seasoning. I will definitely continue to cook pumpkin seeds in the air fryer moving forward!

What is your favorite way to make pumpkin seeds?

Also… if you have an easier way to shell them before cooking please let me in on the secret!

View all posts by Steph